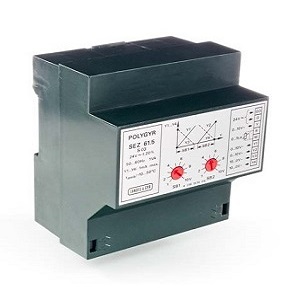 The SEZ61.5 is used in POLYGYR controlled air conditioning, ventilating and heating installations to double and/or invert the 0...10 V d.c. control signal supplied by a continuous POLYGYR controller.

Control of two regulating units if these have to be controlled in sequence by the same controller and if their modes of operation are the same. For example:

- Control of two valves which are hydraulically connected in parallel to improve the controllability with small flow rates.

Doubling and inverting of signal

Control of two regulating units if these have to be controlled in sequence by the same controller and if their modes of operation are opposed. For example:

- Sequence control of an air damper system and a heat recovery system, whereby the control output Y3 of the RWF61.30 controller (or Y1 of the RWF61.11) acts on the SEZ61.5

Control of a regulating unit whose mode of operation is opposed to that of the control signal supplied. For example:

- Control of a recirculated air damper which must be closed when the operating voltage is switched off.

An additional input for potentiometers of 0...1000 Ω offers the following possibilities:

Number of POLYGYR units that can be connected: max. 10 per output


If you have any questions about this product please email us at saadwaheed09@gmail.com